I know you've seen those those beautiful forms that walk you through one question at a time. They're the interactive forms with keyboard shortcuts, elegant designs, an impeccable mobile experience, and a level of engagement we all aspire to for our form processors. I also know you found out they're from TypeForm, went to their site, and nearly choked when you saw the $1,000 / year price tag. We've all been there, and we've all been waiting for an alternative.

Fluent Forms' Conversational Form feature is the most affordable and feature-rich alternative to Typeform for WordPress. Fluent Forms offers interactive forms like TypeForm, smart layouts, welcome screens, keyboard commands, and a variety of form fields that look and behave just like TypeForm.

With Fluent Forms update 4.0.0, you can now create a beautiful, conversational, user-experience-focused form for a fraction of the price you'd pay at TypeForm.

Looking for the Lifetime Deal on Fluent Forms? Pay one time and get access here.

Using Fluent Forms you can create what's called a "Conversational Form" which gives you access to a special type of form with fields designed specifically to provide the experience found in TypeForm.

Building the form itself is simple, and the process is no different than creating any Fluent Form or typical WordPress-based form processor form (though Fluent Forms does provide an exceptionally smooth experience compared to most). 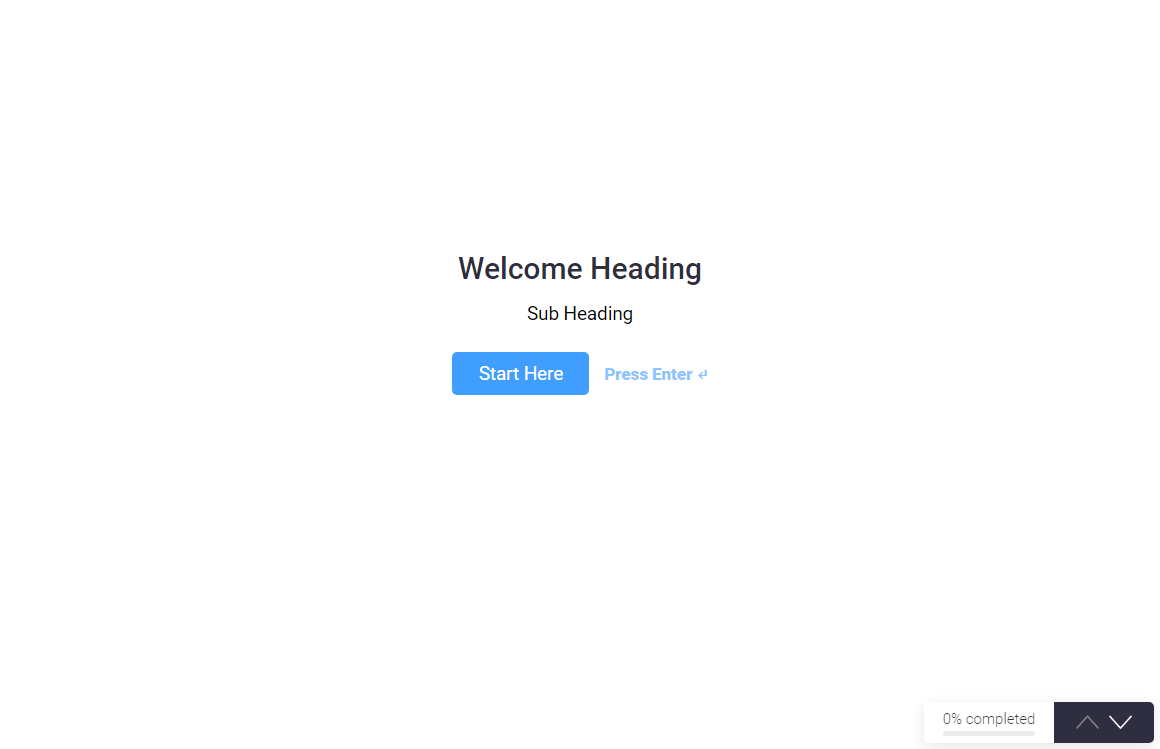 You can choose a Welcome Screen to get started among many other form fields that are standard to a TypeForm and WordPress form processor.

The only fields currently missing are payment fields, but I hope that those are added soon.

All of the Conversational Fluent Forms have keyboard commands like you would expect. You can use enter to proceed to the next question.

You can even use your mouse wheel to scroll to the next question.

One feature that makes a form look particularly polished is the full-height image that fills the container next to the form question.

Just like TypeForm, you can edit this image per question giving your users visual cues and breaking up the monotony of filling out a form. 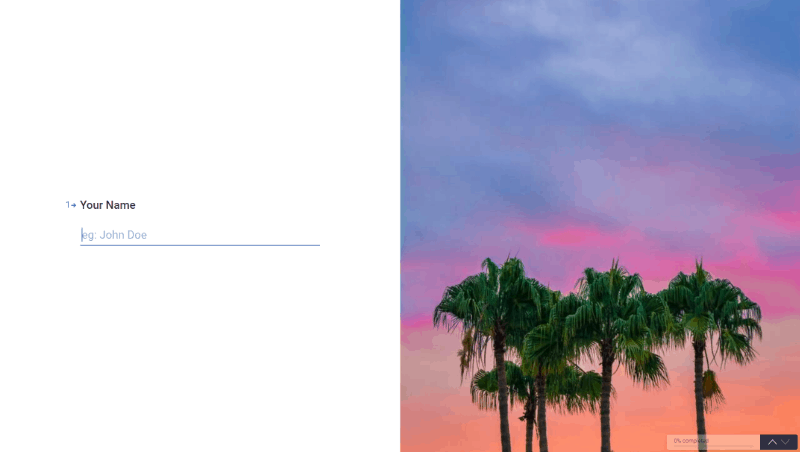 A great way to engage those taking your quiz is to break up questions with different types of imagery.

Instead of radio buttons (select only one) with just text in a vertical line, turn them into images and display them horizontally.

Conversational Forms can be customized in real time inside the design tab. Here you'll find color optiosn for questions, answers, buttons, button text, and even apply an image to the entire background of a question. 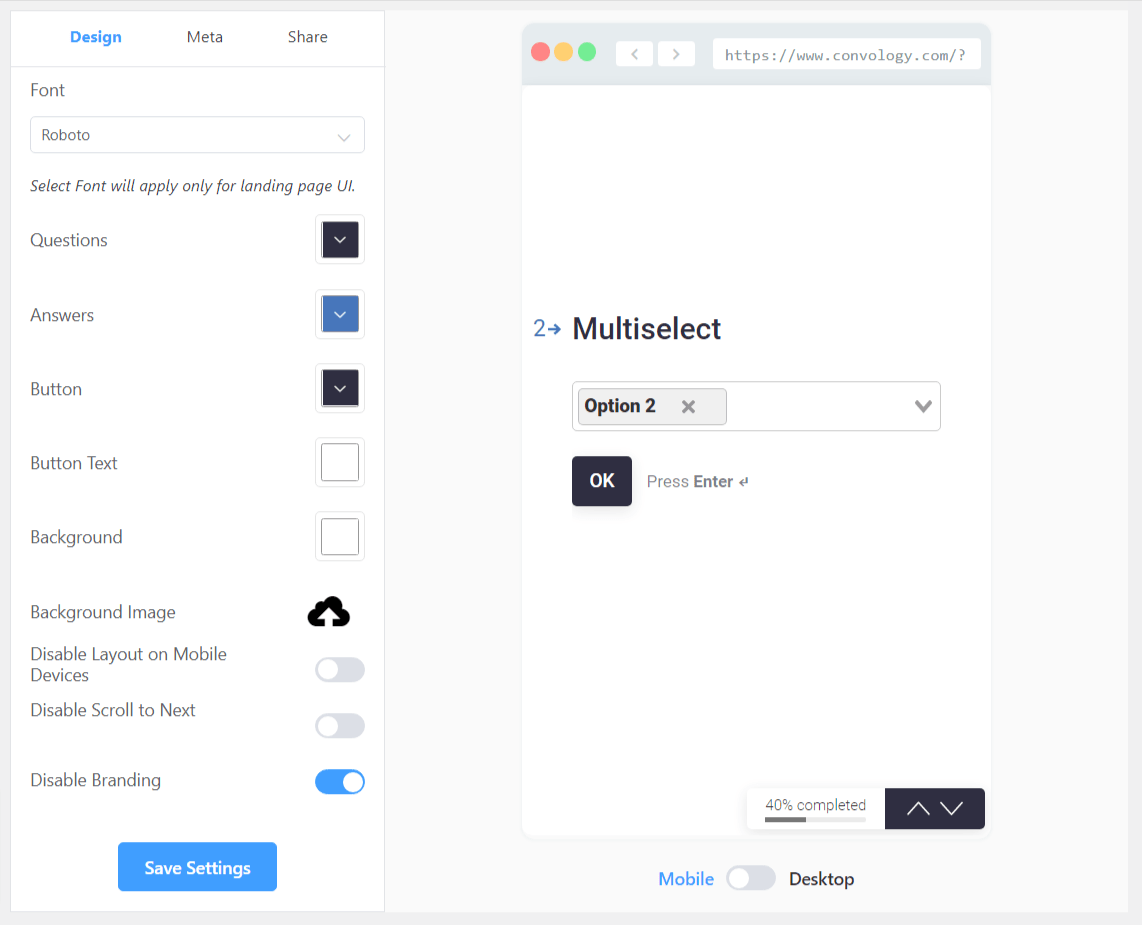 This customizer makes even Fluent Forms' regular customizer look dated. I wish they would bring this level of customization to ALL of their forms.

It's here than you can also disable branding on the forms (I believe this is a PRO feature only) so that your visitors or clients don't see the 'Powered by Fluent Forms' tag.

Directly Link to Your Forms on Their Own Page

A typical form processor is embedded onto a page on your WordPress website. With Conversational Forms, you can link directly to the form itself so that the user is immersed entirely in the experience of filling out the form. Combined with the aforementioned full-screen images, this creates a particularly focused design.

One of the craziest features that truly makes Fluent Forms' Conversational Forms an alternative to TypeForm is that you can embed your forms anywhere. Truly anywhere.

I tested putting a Conversational Form into a ConvertBox. It worked.

I tried putting my form on another one of my websites. It worked.

You can create a central hub for all of your forms!

Since we're looking at Fluent Forms as an alternative to TypeForm, it makes sense to evaluate pricing and the value for what you get at this price.

Fluent Forms occasionally runs a Lifetime Deal Discount (they're running one at the time of writing this post, and they've run them in the past).  Currently you can get a single site license for $149. Click here to access the lifetime deal pricing page. Even then the price goes up, you're paying a FRACTION of what TypeForm costs on an annual basis. 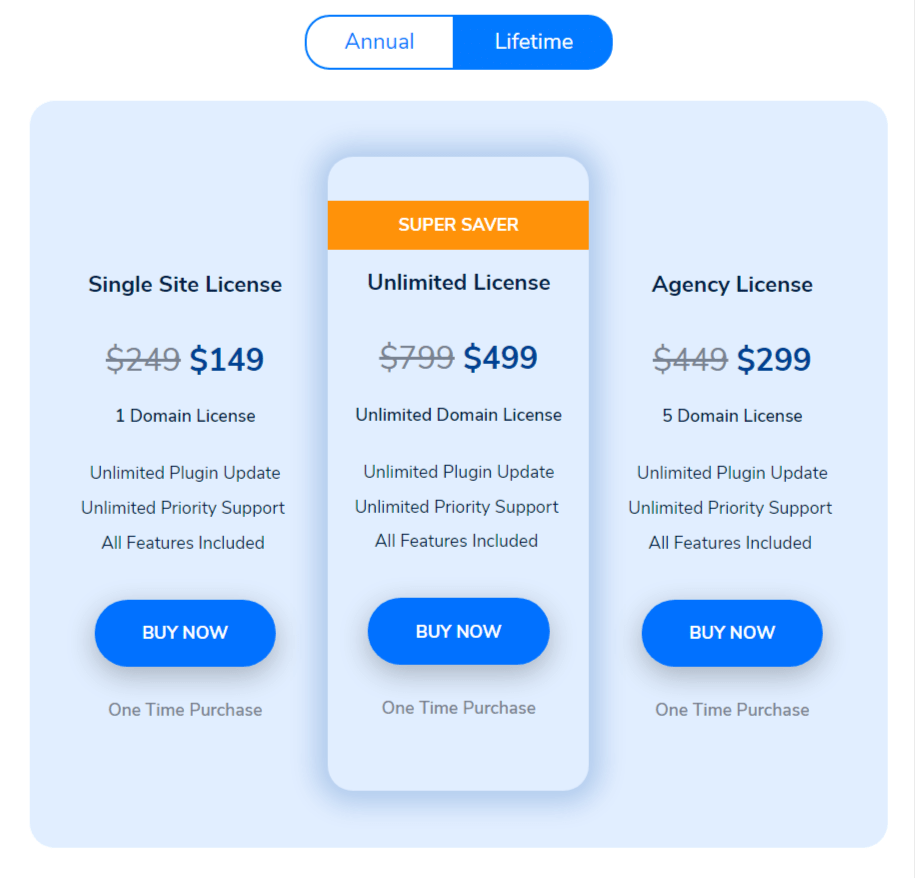 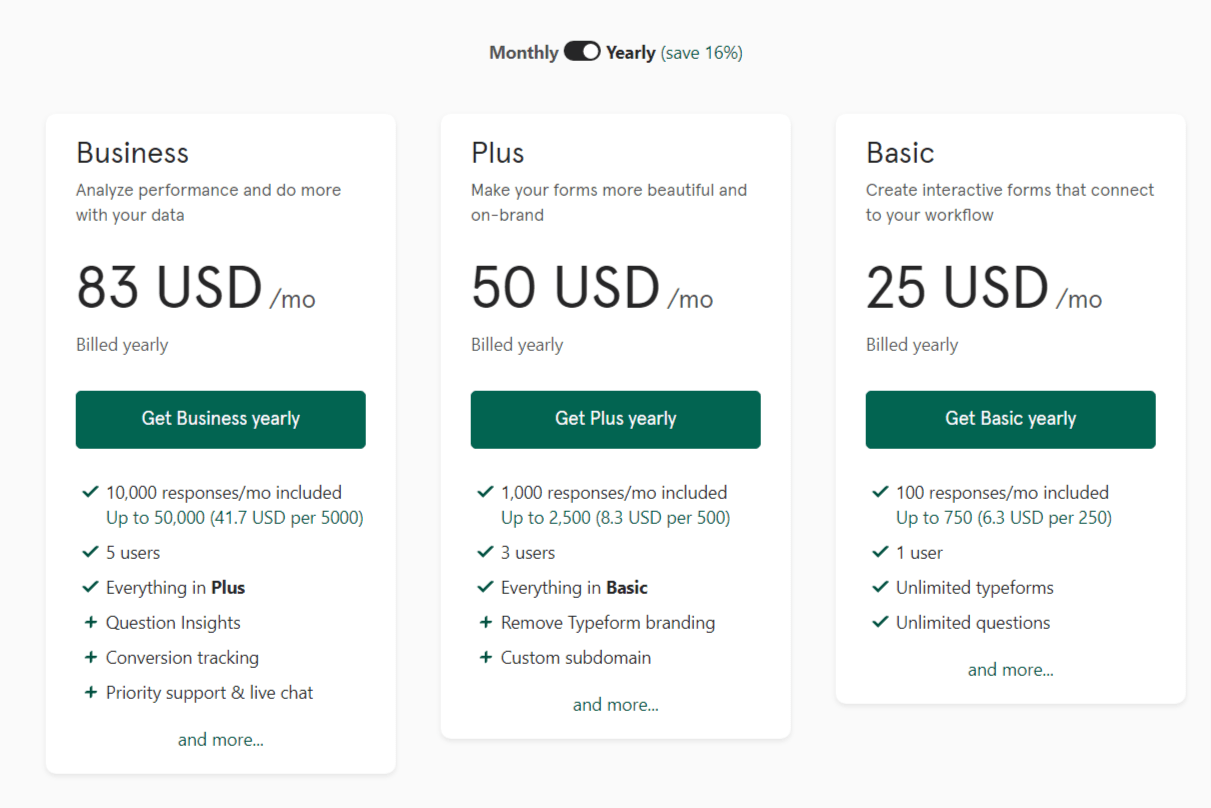 In order for you to get all of the features that Fluent Forms has, you'll have to pay $83 per month (you must pay annually to get this price) which means $996 every single year.

While some of the features are still to come with Fluent Forms, namely the payment features which I hope will come to the Conversational Forms soon, paying a fraction of the price for nearly an identical tool makes Fluent Forms more than a worthy alternative to TypeForm.