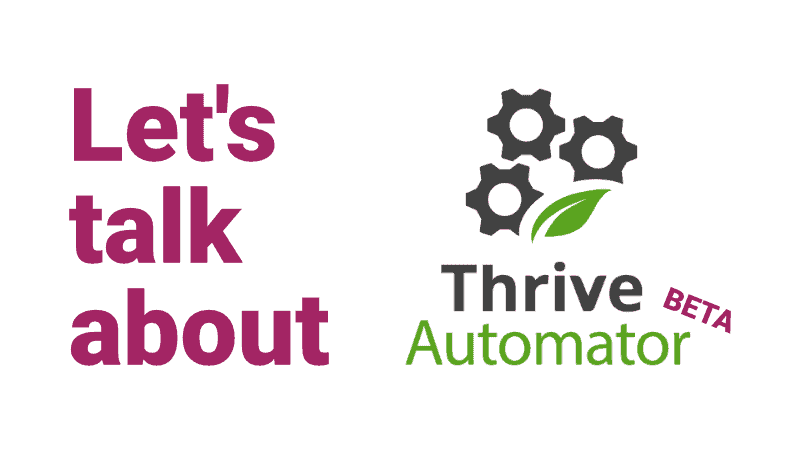 Thrive Themes' plugins have historically been very closed off to external tools the rest of WordPress. Recently Thrive introduced and API and developer documentation, inviting other tools to connect with Thrive Suite's ecosystem.

Thrive Automator marks the first step towards connectivity and improving the functionality for many of us who rely on Thrive as a central component of our tech stack.

How does Thrive Automator Work?

First you choose what happens. This is called the Trigger.

Then you apply a Filter to refine or limit the trigger to fire only if specific criteria are met, and determine if there is a Delay required between the trigger and the next step.

Lastly, you choose what happens when that trigger and filtered conditions are met. This is called the Action.

This workflow, or "automation", then waits in the background for the conditions to be met and the action to fire, thus automating many tasks that may have otherwise been automated or reliant upon other external tools.

What Can Thrive Automator Do?

Right now in the early stages of its beta release, not a whole lot. There are great integrations with WooCommerce to trigger when ecommerce events happen. But the actions are severely limited to only email autoresponders right now.

The bulk of Thrive Automator's usefulness comes from opening up the Thrive Apprentice platform. Triggering course enrollment and starting to open up the workflows around online course management is the star right now.

And I'm not sure what the ultimate intentions are for Thrive Automator, but right now it feels like the focus will be centered around connecting the world to Thrive, rather than connecting anything else to .... anything else.

Bottom line, there's still a lot of work to be done by Thrive AND third-party developers.

What Thrive Automator IS NOT (and may never be)

Thrive Automator is not a Zapier alternative or replacement. I don't think that's what Thrive Themes intends for the product, either. Thrive Automator is meant to connect the world to Thrive's ecosystem, and make workflows that enhance how Thrive's plugins coexist with the rest of WordPress.

There ARE triggers and actions that have nothing to do with Thrive.

But unless the world of third-party plugin developers and SaaS tools suddenly decide to develop specific integrations with Thrive Automator, there will only be connections where Thrive has already made those connections or is willing to invest the development time. This seems limiting to me.

The future of Thrive Automator will heavily rely on Thrive Theme's willingness to create apps and their own API connections, as well as other developers creating integrations with Thrive.

We're still missing a lot of what will make this tool a key player in our tech stack, but they're working on it and will hopefully have these out soon:

I hope that we see the ability to catch a Webhook and then take that data and do something with it. This will greatly open up the ecosystem to third-party tools where the developers or Thrive aren't willing to make the connection.

Thrive Automator is definitely going into my tech stack, and will hopefully soon player a key role in making my business much more automated and convenient.