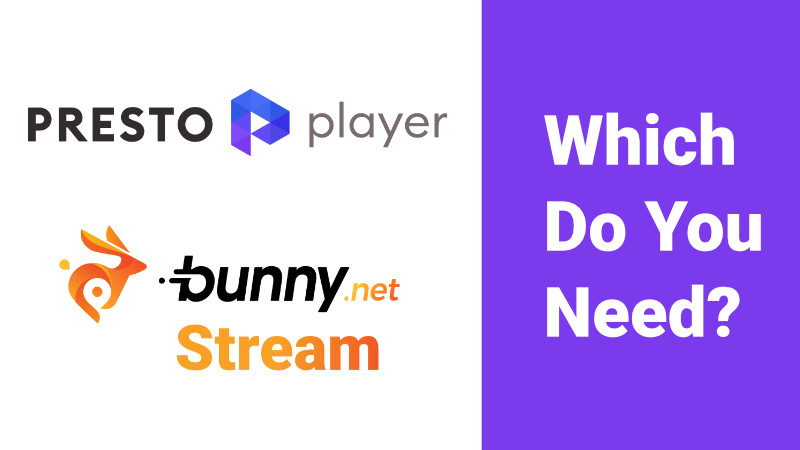 When Bunny.net released their new video hosting, transcoding, and streaming service the first question you all asked me was, "Does Bunny Stream make Presto Player obsolete?"

Since Bunny Stream has its own customizable player and plays videos hosted right from Bunny.net just like Presto Player does, I think the question is valid.

Presto Player is a video player. It requires hosting and builds its feature set to support the playing of the video on your WordPress-based website. Bunny.net is a CDN/Hosting/Streaming service that has a player.

Since Presto Player needs video hosting, and the best choice for video hosting is Bunny Stream, it makes sense that in this comparison Presto Player will need Bunny Stream and we'll proceed under the assumption that the video hosting features are identical: Geographic hosting location and pricing would be the same; Both would have no transcoding fees; Both would have the complete CDN integration with no additional settings; It's all the same at that point.

So really it boils down to: What does Presto Player add in their player and additional features that Bunny Stream doesn't have in theirs?

I made a table of the ones that I think matter most.

Bunny Stream or Presto Player: Which Do You Choose?

Presto Player enhances Bunny Stream. It makes it even better. It provides lead capture, presets, overlays, and continues to focus on being the best video PLAYER for WordPress. Bunny Stream, while is has an AMAZING player, lacks almost every major feature that Presto Player offers.

BUT... Do you need those features?

Do you just want to host the video and drop it into your course and don't care about the additional features of managing your videos from inside your website? Don't get Presto Player. You'll be fine with just Bunny Stream.

Want your player to be jazzed up, capture leads to watch videos, have video analytics, muted auto player, automation integrations, and a player that's sync'd to your WP site? Get Presto Player. It's the best player I've found.